5 astonishing roads in the World Roads are the way to travel around the destination, by crossing rivers or even mountains, Road trips are always enjoyable, adventurous and exciting. But some roads are marked as dangerous to travel, difficult to drive and positive causes of accidents.


Nature might be sometimes very cruel to turning things upside-down. Let's have a look at the top 5 deadliest roads in the World

Atlanterhavsveien, known as the Atlantic Ocean Road, runs across an archipelago of small islands and skerries in Møre og Romsdal county. Throughout its 8.3-kilometer stretch between Kristiansund and Bud, the road connects Averøy island with the mainland thanks to the creative use of bridges. Opened in 1989 after many battles with the elements of nature (namely hurricanes), the toll-free road is officially one of the Norwegian Scenic Routes. By following it, you’ll have the chance to see the striking Norwegian coastal landscape at its best: small ragged islets connected by causeways, picturesque villages like Kårvåg and Vevang and, in between, the majesty of the Norwegian Sea.

The whole experience slightly resembles the feeling you get when on a roller coaster. The road is completely serpentine, twisting and turning, dipping and arching over the very often imposing waves. There is a part of it, in Hustadvika, where there’s nothing between you and the sun sinking on the horizon. There’s also the Storseisundet bridge, the largest of the eight bridges that comprise the road, which is equally impressive to drive through and photograph from a distance. One of the bridges is specifically made so people can fish as the whole area has been a popular fishing spot for the locals. And when there’s a storm, waves tend to scatter over the road – drive carefully.


Due to its location and impressive construction, the Atlantic Road has won several awards and received many monikers. First and foremost, the “Norwegian Construction of the Century”– was awarded in 2005 by NRK (the national broadcaster) and the construction industry. NRK and Ut.no also named the road “Norway’s best bicycle trip” a couple of years later. 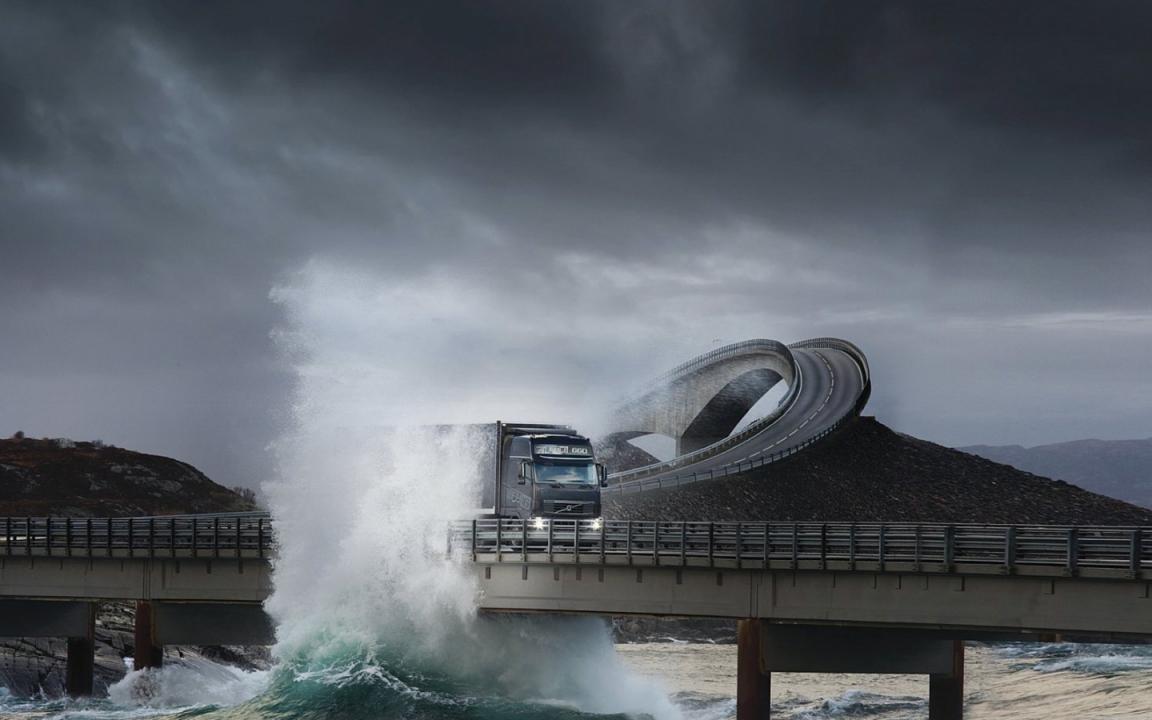 Do not travel this road in severe weather conditions. It has a well-deserved reputation for being dangerous because of unpredictable snowstorms and blizzards, and driving under these conditions can be extremely challenging. This road has an open sea view which is not so common for roads along the Norwegian coast.


North Yungas Road is known as "Death Road" for all of the reasons you'd guess. Driving up or down this 43-mile (69-kilometer) switchback is extremely perilous due to fog, landslides, cascades, and cliffs that drop 2,000 feet (610 meters) at every turn.

The route includes the Cotapata-Santa Bárbara section. It replaced the old road, built-in 1930. It was considered dangerous because of its steep slopes, narrow single track, lack of guardrails, rain, and fog, and was nicknamed the "Road of Death". However, it was not the most dangerous road in the region. Unlike the rest of the country, traffic was left-hand, to allow the driver to assess the distance of their outer wheel from the edge of the road. 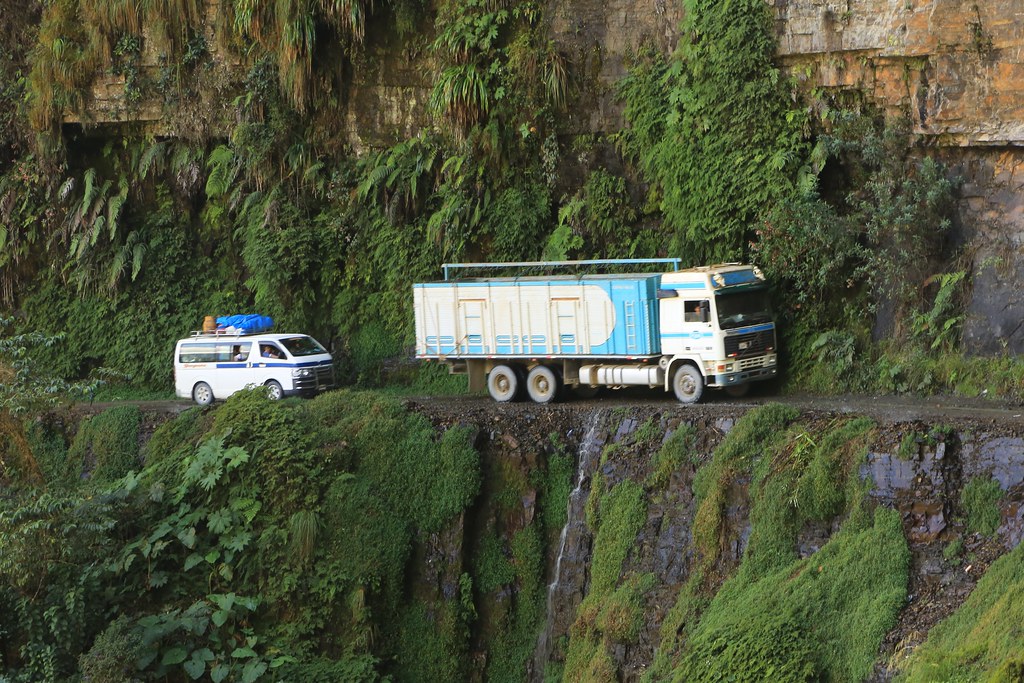 Although the road is officially closed to traffic, the odd car still finds its way onto the narrow track and the cycle tours are permitted to bring support vehicles with them. It is rumored that public buses still use this route occasionally on their way to the jungle town of Rurrenabaque.

Skippers Road is mostly one-way, narrow and steep with sheer drops of several hundred meters. No insurance covers rental cars on this route, and if you have ever met oncoming traffic on this unsealed, narrow and twisting route with a vertical drop on one and a vertical rock wall on the other side, you understand why.

Skippers Road clings to the side of Skippers Canyon, which drops vertically to the Shotover River, once known as "the richest river in the world".

Some people have been lured up this precipitous road with adventure on their minds.  There's rafting on the Shotover River, jetboating with Skippers Canyon Jet and 4WD adventures to Skippers. Others want to discover the amazing Upper Shotover scenery - dramatic schist bluffs and rock tors stand like sculptures in the tussock landscape. The road commands views of the Richardson Mountains to the west and the Harris Mountains to the east.


The highway begins in Chengdu of Sichuan on the east and ends at Lhasa in Tibet on the west; The road is 2.142km  (1,330 miles) long. Nonetheless, it’s a regular route for truck drivers heading to the roof of the world. The trip may take around 15 days so make sure you’re not in a hurry! Motorists braving this death trap will be rewarded with views of the region's majestic peaks and picturesque landscapes. The Sichuan-Tibet Highway has claimed thousands of lives over the years, and a single mistake could result in death. This high-elevated route takes you through open landslides and majestic scenes. Landslides and rock avalanches are just some of the difficulties you may face on this ride.

The Sichuan-Tibet Highway, also known as the silk road, originally called the Kangding-Tibet Highway (a section of the No. 318 National Trunk Highway) takes you through vast, open landscapes with majestic peaks vaulting skyward. The plateau areas are dotted with castellated Tibetan homes and an infinite number of contentedly munching yaks.

Travelers can enjoy the magnificent and changeable scenery ranging from warm spring to cold and snowing winter, which makes you intoxicated. This climate will be changing in front of you and you may think “days in heaven, but years on the earth”. The Sichuan-Tibet Highway is also infamously known for bad driving surfaces and sharp mountain-side hairpins. Driving along single-track sections in bad weather can be a great challenge to a less experienced driver. 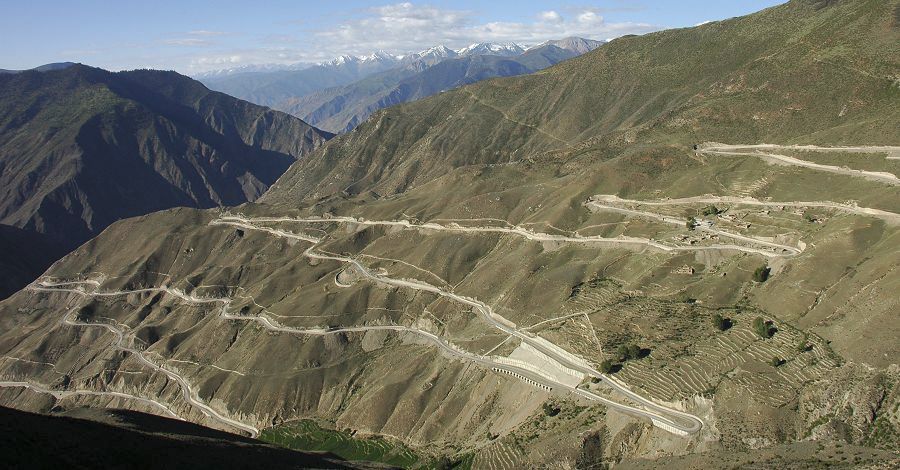 Oxygen is scarce - only half of that at sea level. On top of this, the highway itself presents challenges - it makes 99 harrowing switchbacks along a 38-kilometer stretch as it swings down the mountainsides - starting at the 4,658-meter Yela Mountain, before descending nearly 1,200 meters to a dangerous bridge.

The highway is not paved which makes it a mud trap during the rainy season. You will often come across thousand car jams stretching for miles. The real danger is not in getting stuck in the jam but in the hostilities that crop up among bored drivers. There are constant fights, theft, harassment, and even kidnappings for money when drivers are stuck in the mud for weeks or before the road ranger appears.

The construction of the highway began in April 1950, and on December 25, 1954, it was open. Sichuan-Tibet highway is the most dangerous but most beautiful road route, where you can feel the real nature. Snow mountain peaks, mountain passes and deep gorges can be seen along the highway route.


The Stelvio pass in Italy descends in a zigzag layout across many miles. The way is one of the highest passes to drive along in the European Alps. Voted the best driving road in 2008 by Top Gear, and with an incredible 48 hairpin turns, the highway may not be the most dangerous on our list, but it certainly is the most winding. Concentration is key so make sure you’re not distracted by the glorious Alpine views.

The Stelvio Pass is a mountain pass in northern Italy bordering Switzerland at an elevation of 2,757 m above sea level. It is the highest paved mountain pass in the Eastern Alps, and the second-highest in the Alps, 7 m below France's Col de l'Iseran.

The Stelvio Pass, or Passo Dello Stelvio in Italian, is the second-highest paved mountain pass in the Alps. The road zigzags for about 29 miles up and over the Ortler Alps in northern Italy, a stone's throw from the Swiss border. After 15 km you reach a moderate part of the ascent lasting about one kilometer, from here you can see the final part of the climb to the Stelvio Pass, The last 4 km are the hardest and most demanding with a gradient of over 8%.

The Stelvio Pass remains important for the sport when it is open from May through November. Countless cyclists and motorcyclists struggle to get to the highest stretch of highway in the Eastern Alps. The Stelvio Pass was also picked by the British automotive show Top Gear as its choice for the "greatest driving road in the world"